7 nights / 8 Days tours and Safaris to ETHIOPIA with Heavenly International Tours. Ethiopia is rich with natural contrast, captivating human history and countless surprises and is the intersection between the civilizations of North Africa, the Middle East and Sub-Saharan Africa. This tour to Ethiopia is perfect for the traveler looking to learn the history and culture of this incredibly diverse land.

Arrive at Addis Ababa, Ethiopia. After passing through customs, your waiting team will escort you to your hotel.

Today after breakfast transfer to the airport for your flight to Bahir Dar up on arrival meet with your driver and transfer to your hotel, after taking a rest start to explore Bahir Dar, is situated on the shores of Lake Tana. 68 km wide and 73 km long, it was formed at least 20 million years ago, by an ancient lava extrusion that effectively functions as natural dam. Tana is Ethiopia’s largest lake and is dotted with not less than 30 islands, on many of, which are found churches and monasteries. After breakfast, by boat cross Lake Tana. Today the lake is most famous as the home of the monasteries established on some 20 of its 37 islands. Travel by boat to Zeghe Peninsula where you will visit the two churches of Ura Kidane Mihret and Azuwa Mariam which were built in late 13th and 14th century respectively. Ura Kidane Mihret is the most impressive monasteries in Tana; the walls are covered in incredible 16thcentury murals & Azuwa Mariam, which lies closer to Ura Kidane Mihret, and also boasts several worthwhile old paintings. On the way when you return back, visit the outlet of the Blue Nile where hippopotami are resident. After lunch drive to the Blue Nile fall some 30km from the town followed by a 20 minute walk brings you to the fall, which are at their most spectacular during and after the rainy season (from about June to January). And In the late afternoon you will have the city tour of Bahir Dar. The city tour includes visiting the local market and the former palace of Emperor Haile Selassie at Bezawit Hill, with great views of the town and the place where the Blue Nile flows out of the lake.

After taking breakfast start to drive to Gondar. It is distant of 180km or 3hr drive. En route enjoy an interesting countryside and Scenic Mountain View. Emperor Fasilidas founded Gondar as his imperial seat in 1636 and the city was both the capital and a great commercial center from 17th to the mid-19th century. Visit the Royal Enclosure or Fasil Gibbi within the compound and also the castles built by the various emperors of Gondar. A 2 km drive from the town center you will bring you to the bath of King Fasilides, where, during at Timkat (Ethiopian Epiphany) a nearby river is diverted to fill an area the size of a small swimming pool. Worshippers plunge into the cold water in a re-enactment of the baptism of Christ in the River Jordan. Continue drive 2 km to the north east of the Royal Enclosure to visit the Debre Berhane Selassie church, the only church that was saved from Mahdist invasion in the 1880s. According to legend, a swarm of bees routed the invaders. The walls and ceiling of this church are completely covered with murals – the angels’ faces on the ceiling have become a common motif in Ethiopian design.

Today after breakfast start drive to Simien Mountain National Park; it is about 138 km from Gondar. This is one of the UNESCO World Heritage site since the late 1960s. En route visit the former Felasha (Ethiopian Jews) village at Wolleka, to buy some of the characteristic pottery sold there. (Most of the Felasha or Bait Israel as they prefer to be called was taken to Israel in the 1980s). The Simien Mountains National Park presents perhaps the most dramatic scenery in Africa – great volcanic plugs, formed some 40 million years ago. In the Simien visitors can see the endemic Gelada or bleeding heart baboon, the Walia Ibex, the Ethiopian Wolf and rock hyrax, and endemic birds such as the Thick billed Raven, Black headed Siskin, White Collared Pigeon, Wattled Ibis, White billed Starling, Spot breasted Plover and White backed Black Tit. Cruising Lammergeyers are often seen. The park is also famous for its Afro-Alpine flora, meadows and grasslands punctuated by Giant Lobelia and Red Hot Pokers,
All meals and overnight: Mintwabe Lodge      www.mintwabelodge.com

After taking breakfast be transferred to the airport for your flight to Lalibela. It is a thirty minute flight.
At the end of the 12th and beginning of the 13thcenturies King Lalibela of the Zaghwe dynasty built a series of rock hewn churches in this spot, calling it New Jerusalem. Today Lalibela is rightly acknowledged as being one of the wonders of the world. There are 11churches in the town named after the king. In addition, other rock – hewn churches exist in the surrounding country side. All are still in use today. The first group of six churches lies in rock cradles, one behind the other: Bet Golgotha, Bet Mikael, Bet Mariam, Bet Meskel, Bet Danaghel and Bet Medhane Alem. Bet Medhane Alem, the largest, is built like a Greek temple. In a corner are three empty graves symbolically dug for biblical patriarchs Abraham, Isaac and Jacob. Bet Giyorgis, possibly the most elegant of all the Lalibela churches, lies somewhat isolated in the southwest part of the village on a sloping rock terrace. It can only be reached throw a tunnel. The group of four, south of the Jordan River, comprise of Bet Emanuel, Bet Mercuiros, Bet Abba Libanos and Bet Gabriel-Rufa’el. Bet Emanuel’s elaborate exterior is much praised by art historians.
All meals and overnight: Lalibela Hotel     www.lalibelahotel.com

Today after breakfast transfer to the airport for your flight to Axum, From around 200 BC to 700 AD, Axum was the seat of an Empire which extended across the Red Sea to Arabia, traded with India and China, had its own alphabet and notational system, constructed great engineering works and dams and which was reckoned in the 4th century to be one of the four great powers of the ancient world. Today the visitor can see Stella (the largest single pieces of stone erected anywhere – how they were brought from the quarry and erected is still not fully understood), the tombs and castles of kings, Axum Museum and Mariam Tsion Church, built on the site of Ethiopia’s first church. A chapel within the church compound is believed by Ethiopian Orthodox Christians to house the Ark of the Covenant, or the original tablets of Moses. All meals and overnight: Exudes Hotel

Today after breakfast transfer to the airport for your flight to Addis up on arrival transfer to your hotel, then start to explore Addis, the third highest capital in the world, the visit includes the Entoto Mountain, the site from which Menelik the founder of Addis Ababa descended down to the plains. Two churches built by Menelik are found there. Menelik is crowned in one of them. Nearby, Menelik’s old palace is still intact and open to visitors. This is a small museum featuring royal attire, war items, furniture, books etc. From Entoto Mountains there is a wonderful panoramic view of the city. Also included in your tour is the National museum, which ranks among the most important museums in sub- Sahara Africa. Here the recently discovered skeleton of Selam is on exhibit. Selam was found in December 2000 at Dikika, Afar, in the northern part of Ethiopia. Just like Lucy, Selam is an Australopithecus- aphaeresis. However, there is a major difference between the two since Selam lived over 150,000 years before Lucy!
All meals and overnight: Ras Hotel    www.rashotel.com

Breakfast at the hotel. Transfer you to the Addis Ababa International Airport for your onward /home-bound flight. 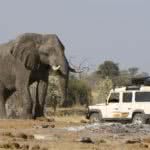 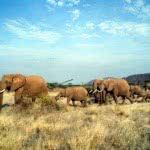